An Earth Box © and similar containers are often referred to as “self watering” containers. That’s the biggest lie in the gardening world. I sat in my lawn chair for days watching them and they have never come over to the rain barrel or tap to get water. The do have reservoirs that will hold a good supply of water but I still have to go and fill it up. How often do they have to be filled?? That depends on a variety of factors. How many plants are in them, how big are those plants and how much sunshine has fallen on them.

What is an Earthbox? Earthbox is a self contained growing system that supplies a constantly optimal level of water and fertilizer. This ensures that the plants always have exactly what they need to develop to their full potential. They consist of a lower box that is a water reservoir and an upper portion that is filled with a soilless growing medium and a supply of fertilizer. That fertilizer can be chemical or organic depending on the preferences of the gardener. The planted box has a plastic cover over the soil that stops moisture from escaping from the surface of the soil, stops the fertilizer from being dissolved by rain water and most importantly, to real gardeners, stops any weed seeds from finding homes in that soil. 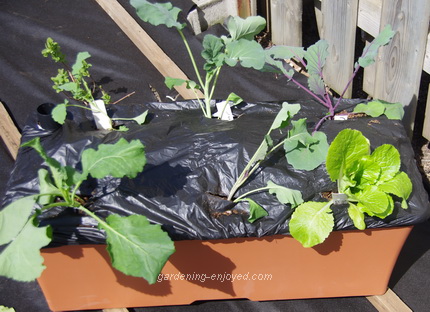 How Do I Set It Up? Setup is very simple and Earthboxes come with very specific instructions. Basically you fill it with the growing medium and put a strip of your chosen fertilizer on the top then put on the plastic cover. They do recommend that you incorporate some granular limestone to raise the ph as the soilless mixes are primarily peat moss that has a low ph. Depending on the crop you are growing you cut the appropriate number of slits in the cover and plant your seedlings. Fill the water reservoir and you are done. After the setup you keep the water reservoir filled and watch your plants thrive. 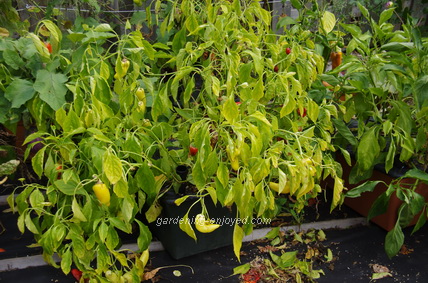 Do All Vegetables Do Well? In my experience, most vegetables did very well. The one real exception, for me, was Brussel Sprouts. They are such a long term crop that the constant supply of moisture developed the sprouts but then they all rotted before they could mature.
I spaced my boxes too close together. I thought they were well spaced but the plants grow much larger than they do in the soil and by mid summer were co-mingling with each other. Late in the summer some of my Pepper plants became very chlorotic while the ones in the box next to it stayed a nice dark green. I suspect that I didn’t put sufficient fertilizer in those Earthboxes or I used an organic fertilizer that works fine but requires a larger supply. 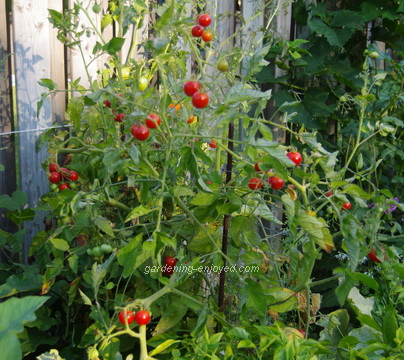 What Other Problems Are There? The large amount of growth is both a benefit and a problem. Some of my Peppers and Eggplant grew so large that they were unable to hold themselves up. Their flopping over contributed to the need for more space between the boxes. I’m going to try using a fertilizer with less Nitrogen next year to see if I can reduce the excessive vegetative growth. Staking is not very successful because the stakes are in that very moist soil and are therefore not very firm. These large plants also used a lot of water and by mid summer I was filling the reservoirs almost daily. They no longer received water from the rain barrels because I was too lazy to carry that much water. I kept a hose near the Earthboxes and just filled the reservoirs with it. Earth Box sells a variety of supports for large plants like Tomatoes that need to be supported. I created my own that worked fine but, of course, it was too short. 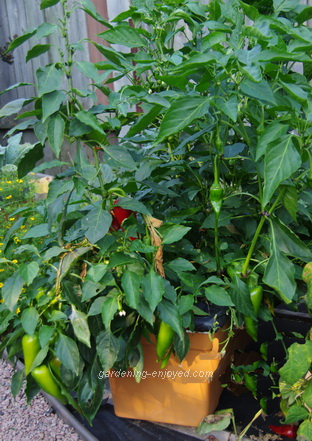 How About the Good Things? NO WEEDS! The plants are high enough off the ground that the rabbits don’t reach them. Those are the wonderful side benefits. The abundant harvest of bug free produce is the obvious main reason for using this system. Tomatoes, Eggplant and Peppers were my main crops and they all produced much more than they would have in the same amount of space if planted directly in the soil. I did produce some great early crops such as Cabbage and Broccoli. The Broccoli produced for several weeks but single crops like Cabbage and Cauliflower are cut and gone and you need a whole Earth Box to plant 4 cabbage. They grow quite large so two Cabbage and two Cauliflower is a lot of food. I have never tried root crops such as Carrots or Rutabagas but maybe I will next year. I had too many Peppers because I had several different varieties to try. I need to convert some of those Pepper boxes to Beans and Lettuce, which I’m sure will thrive. Can I place an Earthbox near the trellises where I have been growing pole beans and see how they perform? 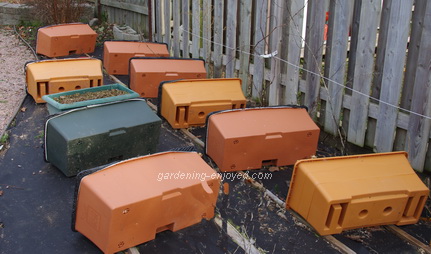 Winter Time? In my part of the world, winter is not a gardening season. The Earthboxes have the vegetation cut off at the soil surface and composted. The boxes are tipped on their side with the drainage hole facing down so that all of the water in the reservoir drains out and does not freeze and possibly break the box. We’ll start over in the spring. 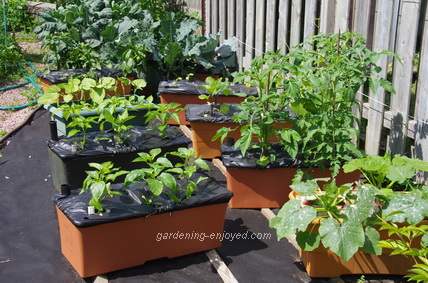 What Else? Will I ever give up planting directly in the soil. Probably not but each year as I curse the weeds, and get older, I will try adding some more reservoir containers and try different crops in them. The Earth Box system works very well but replacing all of my vegetable garden with them could be quite an expense. I do have a couple of competitive models that were on the market for a short while. They have a few problems. If you are the handy type that prefers to spend their time rather then their money then you might try my home made ideas.