Growing our own home garden grapes sounds like a very appealing idea. They shouldn’t take up much garden space as they grow up a trellis and they seem to be very hardy and fast growing. I thought so too, until I was given a couple of grape vines and planted them along one of my fences. After I pruned them in the second winter, I finally did the research I should have done before I started. Growing our own home garden grapes is indeed possible but it certainly is not as easy as it might appear. It is a three to four year process to train and prune your new vines so that they will produce wonderful fruit for many years. 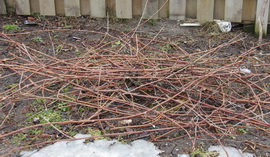 It’s all about pruning There are many different pruning systems and a couple of them recommend themselves growers of home garden grapes. The difficult thing to adjust to is removing about 90% of last year’s growth each winter. I strung some wires and started to train my vines and then discovered that I had the basis of a six arm kniffen. Four arm kniffens are more popular and that is probably where I will wind up. I had never heard of a kniffen but apparently now I have one. The basis of the late winter pruning is to create some horizontal canes of last year’s new growth. These will produce this years fruit and next years canes. Let’s follow the 3 year process to establish good home garden grapes.

Year One In the spring, purchase and plant a variety that is suitable to your climactic zone and that will produce the fruit type that you prefer. Let’s restrict ourselves to table grapes and leave the large vineyards to produce our wine grapes. Plant in soil that is well amended with compost and dig a large enough hole to accommodate the rather large root systems. Select the sturdiest looking vine and train it up a vertical wire or post and then remove all others. One is all you want or need. Let it grow up the wire as far as it will grow the first year removing any side shoots that develop. 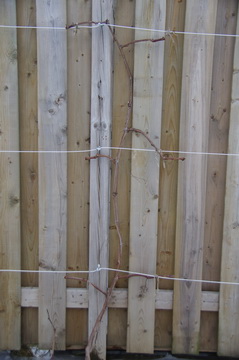 Year Two You should have constructed a trellis with either 2 or 3 horizontal wires running away from the vertical that is supporting your vine. In the late winter it’s time to do your first pruning. If your vine has made it to the top of your upright then prune it at that point. Choose 3 or 4 buds that are close to each horizontal wire and remove the rest. Remove any fruit clusters that start to grow.


Year Three During your late winter pruning, choose the strongest of the canes that grew last year and train one along each of the horizontal wires and then prune after about 6 buds. At the base of each horizontal wire prune a couple of the other canes to 2 buds and remove all of the others. The longer one will produce fruiting shoots for that year and the shorter ones will produce the canes to be trained on the wire for next year. 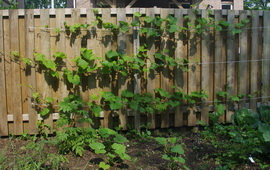 Subsequent Years Late each winter on a sunny pleasant day wander out to the garden and do the regular pruning of our home garden grapes. Remove the cane that was trained to each wire and choose one of the new canes and train it to the wire cutting it off after about the 10th bud. At each wire remove all but two of the remaining canes and prune those two back to 2 buds. These will produce the next year’s fruiting cane that will be trained. Continue to follow this cut and replace system to produce good home garden grapes for many seasons.