Powdery Mildew shows up and attacks a wide range of plants in my garden in late summer or early autumn.
Although it looks very similar on each plant that it attacks and we use the same common name for it, no matter who it attacks, the causative fungi are actually different for each different plant attacked. The white fluffy growth on my Tuberous Begonias will not attack the Zucchini growing beside it. While it’s interesting to be aware of that distinction it doesn’t change the damage or our control methods for any of the various types. 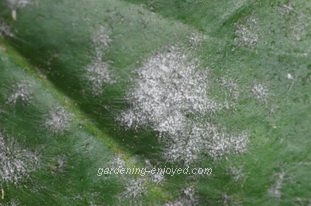 Technical Description Powdery mildew fungi are obligate, biotrophic parasites of the phylum Ascomycota of Kingdom Fungi. Most of us home gardeners really don’t care about or even actually understand that first sentence but we could memorize it to amaze and impress our neighbours. 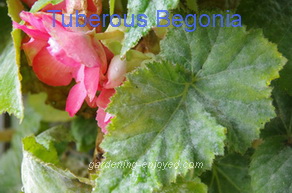 What really matters. . The diseases they cause are common, widespread, and easily recognizable. Infection by the fungus is favoured by high humidity and temperature but not by free water. Individual species of powdery mildew fungi typically have a very narrow host range. The notable part here is the need for high humidity but not the need for free water. Some places indicate that spraying with water on a regular basis will actually help control its spread. This seems counter to our basic instincts that mildew grows in damp locations but the mildew in our bathrooms is a very different beast from those wandering around our gardens. 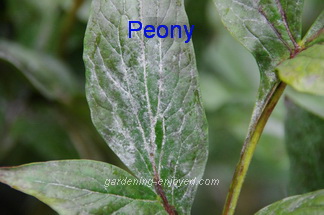 How it Grows. A mildew colony begins with a few traces on the leaf surface. Those traces can be carried there by wind or water splash or the nozzle on the end of your watering can. Out of these traces grow hyphal threads which branch off several times. Special cells (haustories) grow out of these hyphal threads through the leaf surface and settle in a surface cell of the leaf (epidermis cell). The fungus receives nutrition from this epidermis cell of the plant. These hyphal threads continue to grow and multiply regularly. A colony can be visible within days. This rapid growth explains why control is somewhat difficult. From the time we first notice and start to think about a control, it can overtake that plant. With plants that usually show up with Powdery Mildew each year, it’s a good idea to undertake control measures before it is actually visible. 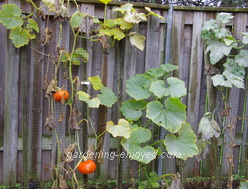 Who Does it Attack? In my garden it attacks several of my flowers and vegetables. On some like Peony, Lilac and Phlox the damage is superficial and occurs late enough in the season that it really isn’t a problem. My Curcubits such as Zucchini, Winter Squash and Cucumbers can be devastated by Podosphaera fusca, the proper name for the variety of Powdery Mildew that attacks those crops. If it occurs late enough in the season it wipes out the vines with little effect on the remaining fruit but it’s impossible to predict when it will show up. Taking some preventive action early in the season will keep it at bay for much longer. 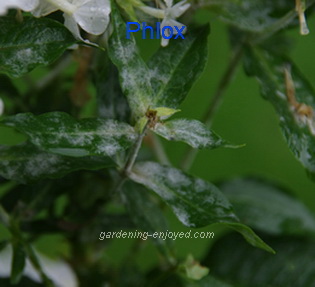 What Can we Do? The most important thing is cleanliness. During the season bag and remove infected leaves. At the end of the season clean up all debris from infected plants or even from plants that are usually infected. Most home compost piles are not hot enough to kill the overwintering spores so remove them from your property. 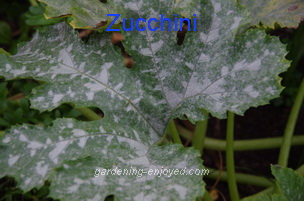 Can We Spray? There are a couple of home remedy sprays that have proven quite effective. Milk stops the fungus’ growth. A typical spray is one part milk to nine parts water. You can use skim milk as the butterfat component is not the effective part. This prevents the milk from souring and producing a temporary bad smell. Spray it on the top surface of the leaves and repeat after a rain. It would take a lot of milk to spray all of my vine crop but I certainly am going to try to preserve my Tuberous Begonias. The other method of attack is to raise the ph level on the leaves surface and the easy way to do this is with a spray of baking soda (1 teaspoon in 1 quart water.) Baking soda is Sodium bicarbonate, potassium bicarbonate is preferable but the baking soda is right there in our kitchen. It can help to add a little oil and/or soap to this spray to act as spreader. 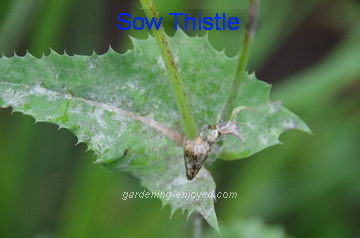 Any Benefits? I have found Powdery Mildew growing on Sow Thistle one of my most prevalent weeds. If it would arrive and kill it earlier in the season I would be quite happy.