At the Tucson Botanical Gardens, the sun rose over the edge of the mountains and poured down onto the the huddled group of Photographers, who were waiting for that early light, they hoped that it might bring some warmth along with it.
We had spent the last couple of days hiding from the searing October sun and were amazed at just how cold it was in the desert when the sun was gone. 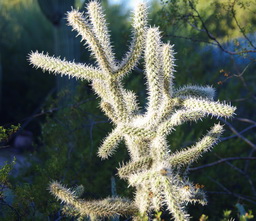 Our Garden Writer’s annual trek always includes an early morning photo shoot for the diehard and dedicated who want an opportunity to shoot with the amazing early morning light and with a much smaller group of people to get out of our shots. The prickles, barbs, needles and spines that adorned most of the specimens in the Tucson Botanical Gardens did not leave a lot of room for manoeuvring in order to get the best angle. Their stark beauty made all of the effort more than worthwhile. 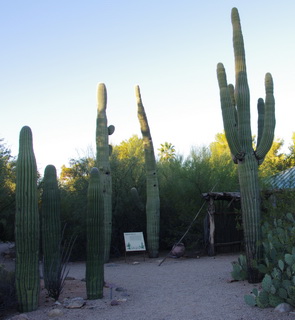 The giant Saguaro Cactus with its muscular arms is probably the most iconic image of this desert and in real life it was truly impressive. It grows straight up for about 70 years before it even starts to put out those fat branches. Cutting one down is a criminal offence in this part of the world. We saw some amazing examples with multiple arms that must have been well over a hundred years old and you just wanted to stop and admire their strength and beauty. Amazingly, some of them had large holes in them where birds had hollowed them out to make nests and some showed scars where previous holes had healed up. The natives used to harvest the fruit for a variety of culinary uses and had developed a variety of long tools to make that job possible. 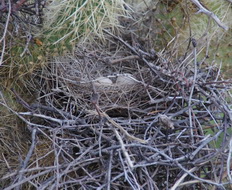 In one of the Cactus that seemed to have the longest thorns we discovered a bird’s nest with eggs in it. It is surely protected from any predators but it must belong to a very careful bird. I can’t imagine how it gets in and out without getting stabbed but I guess we all adapt to our surroundings. 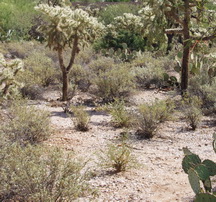 For a gardener who spends much of his gardening time trying to eliminate the weeds that sprout everywhere, the desert looked delightful but strange. There appear to be no weeds. Roadsides and any other untended spaces are just bare and brown. One of the speakers at our seminars showed us a picture of small electric jack hammer and told us, that it was their idea of a trowel. Penetrating the native soil with anything else was apparently very difficult. Amazingly these huge and fascinating Cactus managed to thrive in these conditions. 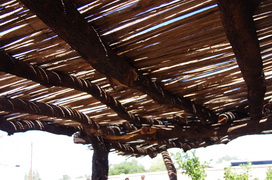 There were a variety of other succulents and a couple of woody shrubs/trees that also made there homes in these inhospitable conditions. The Mesquite tree was a highly useful species because it actually produced some useable wood. The natives had used it for all manner of structures and tools and for fuel to ward off those cold desert nights. 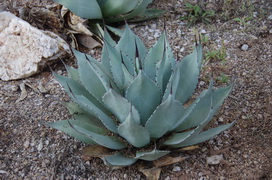 The Tucson Botanical Garden had several varieties of Euphorbia planted and although their appearance is somewhat cactus like, they are all old world natives. There were a wide range of Agaves growing with their wide succulent leaves forming a basal rosette. It’s difficult to call them leaves as they are usually large and very fleshy and typically carrying an very sharp spine at their tips. The varying patterns and colours on these leaves is what makes this a fascinating genus to collect and grow. Although there were many of them planted in the ground at the Tucson Botanical Gardens, many of we visitors new them as container grown specimens in our own gardens. They grow fro many years before they send up their tall flower spike and the die after flowering. They are also the source for Tequila.